This is precisely what the city needs. More YIMBYs and YIMFYs, less NIMBYs. We’ve done the NIMBY thing for far too long, and look where it’s got us. Note the reader comments as well, where there are actually many people who love their neighborhood, want reasonable community benefits, input on the planning and design, while understanding we are in a housing crisis. They aren’t opposed to change, and prefer HOUSING over vacant lots and rundown warehouses. NIMBYs make exorbitant demands meant to drive developers elsewhere, in order to ensure nothing ever gets improved or built. Huge difference. Count me in the YIMFY and YIMBY camp! Great post, read it!

At a time of remarkable economic prosperity and intense housing scarcity, there comes a moment when even the most ardent urbanist must confront their own deepest and most self-interested feelings about change, development, and the clash of old vs. new.

For your Bernalwood editor, that moment would seem to be just about now.

News has reached us that the gigantically impersonal Lennar Corporation has announced plans to develop an entire block of Cesar Chavez Boulevard, between South Van Ness, Shotwell, and 26th Street. Under the plan, the site will become the location for 160 units of new housing in a very large new residential development.

This block, which was once home to the former Lesher-Muirhead Oldsmobile dealership, is now occupied McMillan Electric, a rather glamorous Auto Zone, and John’s ridiculously charming British car repair businesses: 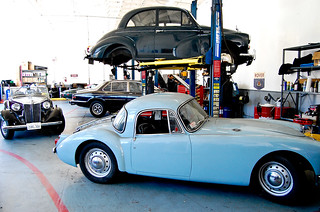 Closer to home, this vast new housing complex will stand right between me and the beloved view of downtown San Francisco that…

Because extreme positions are impractical and painful.